This can be complicated further if you have a spouse or partner who is neither an Australian or New Zealand citizen.

Over the recent years, many changes have been made or introduced, and in some cases, giving good concessions to New Zealand citizens to enable them to progress to become a permanent resident . Some of these pathways and concessions include:-

Some of these concessions extend to the New Zealand spouse or partner who may be in Australia on a 461 New Zealand relative visa.

In addition, from July 2017 New Zealand citizens who have been living and working in Australia and have met some specific criteria may be able to apply for the 189 Skilled visa. The criteria includes demonstrating earnings at specified levels. Full details and legislation is still to be released.

Contact us to arrange a consultation to discuss your visa requirements.  Please note that we do charge a nominal fee for a consultation. 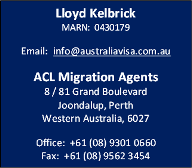 Click below to find out more about Australia Visas:

We charge a reasonable fee for migration advice relating to Australia visas & visa compilation assistance. We are not affiliates of the Department of Immigration & Border Protection - they can be contacted for free advice.